Anyone who has been a mutual fund investor has heard of the Fidelity Magellan Fund. Started in 1963, this fund became the top mutual fund for many years during the late 1970’s – 1990’s. The primary reason was the stellar performance turned in by the Fund’s investment manager – Peter Lynch. In 1977, Lynch became head manager of this the little known Magellan Fund which had $18 million in assets. When Lynch resigned as a fund manager in 1990, the fund had grown to more than $14 billion in assets with more than 1,000 individual stock positions. From 1977 until 1990, the Magellan fund averaged a 29.2% return.

Since Lynch left the fund in 1990, though stayed with Fidelity, the fund has not fared so well. Below are the statistics of the fund, and the fund performance relative to the Morningstar Large Cap index for the past 5 years.

The investment seeks capital appreciation. The fund invests primarily in common stocks of domestic and foreign issuers. It invests in either “growth” stocks or “value” stocks or both using fundamental analysis of factors such as each issuer’s financial condition and industry position, as well as market and economic conditions to select investments. 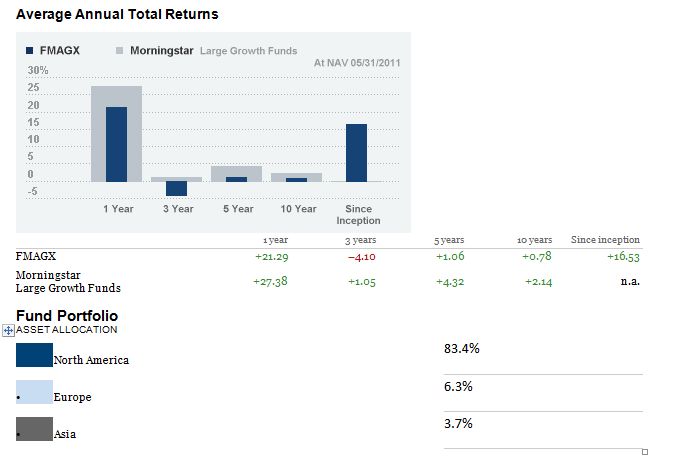 What Do All These Stats Tell Us?

Statistically, the fund has not performed well compared with other large funds, though it did beat the S&P 500 by a small amount. One might say that the Magellan Fund as a proxy for the S&P500, but with higher expenses since it is a Load Fund.

There have been, and are, two main issues with Magellan:

These are the reasons No-Load index mutual funds are more appropriate for most investors. The average investor should never have to pay a sales charge to enter the fund. The Magellan statistics make it obvious that a Load fund does not necessarily perform better than a No-Load fund.

Also, index funds give the investor a better indication of what the fund has invested in and how it will invest in the future. Investors need confidence that they understand what the manager is doing.

Fidelity Continues As an Icon

Even though the fund has not performed as well over the past 5 years, Magellan continues to be very popular with investors. This is primarily due to the fund’s history rather than current or recent investment performance. It is still viewed by many as the icon that it used to be.

Only time will tell if Fidelity Magellan can again achieve it former stature. This is simply a guessing game.  It may be wise for investors to focus on no-load index funds rather than wait to see if this event does in fact occur.